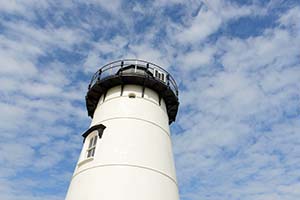 Martha's Vineyard has been a destination for adventurous voyagers for 10,000 years when it was still seventy-five miles from the beach. Summer hunters first visited but didn't stay because of the inhospitable weather. Two thousand years later, after the deer, elk, and smaller mammals had replaced mastodons and mammoths, they moved here permanently. A few thousand years after that, they became the original Islanders when the ice age glaciers began to melt, ocean level rose and the low-lying land that connected it to the mainland was flooded.

The Wampanoag's originally called the island Noepe, or "amid the waters." It was named Martha's Vineyard by English explorer Bartholomew Gosnold, who sailed to the Island in 1602 in his huge masted ship, Concord, and landed at Cape Poge off Chappaquiddick Island, the "island off the island" that is part of Edgartown. He gave the Island a name honoring his own infant daughter and making reference to the many grapevines that once dotted the Island. Today, there is one commercial vineyard on Martha's Vineyard; it is located in West Tisbury and is open to the public.

These Native Americans then welcomed the first white visitors in the early 1600s, 20 years before the Mayflower arrived in Plymouth. The Vineyard has for 150 years been a resort community, first attracting Methodists to summer religious revival meetings under the oaks of Edgartown (now Oak Bluffs).

Although there were 3,000 Wampanoags living on the Vineyard when Gosnold arrived, he deemed it "a dishabitted land." Thirty-eight years later, Thomas Mayhew Jr. and as many as eleven other families from Watertown, MA, moved to the Island, settling what they called Great Harbor – Edgartown. By 1691, fifty-eight English families were estimated to be living on the Vineyard, many of them with the names that still identify Island families – the Mayhews, Vincents, Peases, and Nortons among them. You'll find families, farms, and streets named after them. A trip to any of the old but still used graveyards, with their elaborate headstones and descriptive inscriptions, is an education on the life of the Vineyard

Edgartown became the center of the whaling industry that flourished for more than 150 years on Martha's Vineyard, and that left its mark in the town through the beautiful and historic residences of whaling boat captains. During the early 1800s, when whaling was in full bloom, the waters around Martha's Vineyard were among the busiest in the world. Cape Poge Lighthouse was built in 1801 to guide ships around the same point Gosnold had rounded; seasonal tours allow visitors to explore it. Four other lighthouses dot the Island. Other parts of Martha's Vineyard have equally fascinating histories, much of which is documented and on display at the Martha's Vineyard Museum.

The discovery of petroleum in Pennsylvania in the mid-1800s produced a cheaper source of oil for lamps and led to an almost complete collapse of the whaling industry on the Vineyard by 1870. Fortunately for Martha's Vineyard, another industry took its place with the opening in 1872 of a railway that led from major points and ended at Wood's Hole: tourism. Many of the oldest summer homes on the Vineyard date from that period, particularly in Oak Bluffs, a seasonal ferry stop. Through the years, the Vineyard became a favorite vacationing spot for hundreds of celebrities, from General Ulysses S. Grant to movie star Jimmy Cagney, artist Jackson Pollock, and former President Bill Clinton and his wife, Sen. Hilary Rodham Clinton, whose regular visits while he was president made the Island famous in recent years.

Today on the Vineyard | The Island Life | Island Video Tour

You can also begin your Martha’s Vineyard search by viewing our popular real estate categories. If you have questions or would like additional information, feel free to reach out to us!

Ask Us A Question

Members can save searches, mark favorites, and be notified when properties are changed or newly listed.